- May 31, 2012
Today’s event at was a wonderful exchange of English/Chinese we had people from Lithuania, Canada, Australia, America, and of course Taiwan. Many of the tea sites had a mixture of Japanese, Chinese, and Taiwanese tea ware.  Our foreign friends (non-Taiwanese) were tea site judges, including the tea master’s English ability. 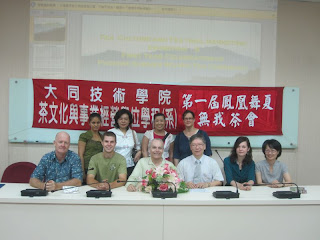 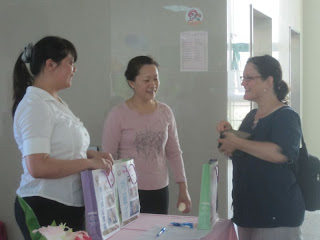 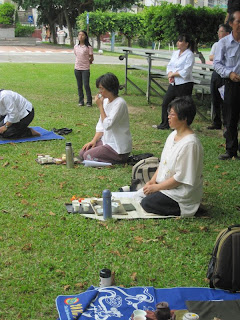 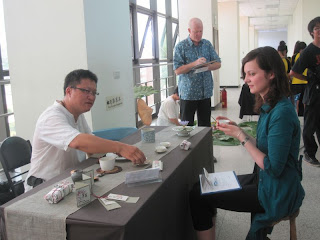 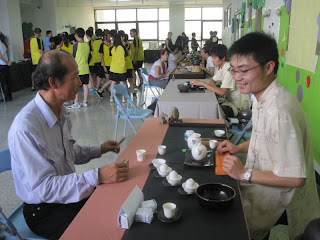 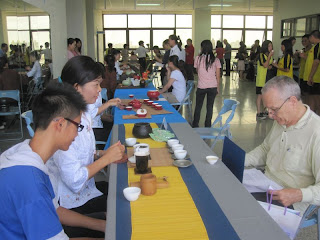 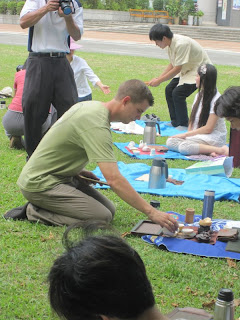 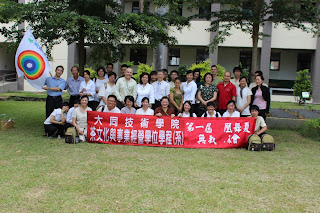 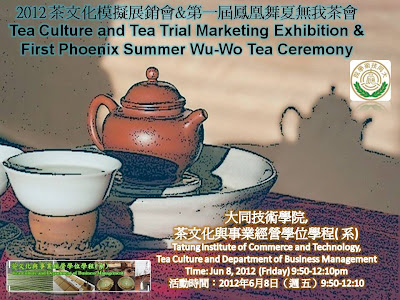 無我茶會程序詳看附件
Wu-Wo Tea Ceremony style can be used for Tea Appreciation Day
Wu-Wo Tea Ceremony is a simple way to brew, serve, and drink tea, it can be done together or alone. Make tea more than just a drink, make it an event t enrich life.

What is needed:
1. hot water in a thermos four times larger than your cover bowl or teapot
2. teapot or cover bowl
3. tea pitcher
4. four teacups
5. tea tray
6. cloth wraps for tea ware and basket, backpack, or bag
7. watch or timer for brewing
8. small cloth
9. mat or stool or cushion
10. tarp, cloth, or towel to setup on 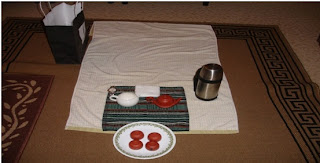 Wu-Wo Tea Ceremony Brief
1. “Wu-Wo” is a style of tea ceremony. People bring simple tea ware and enjoy tea together in a circle. When there are many people, we can make two or more circles.

2. Seats are determined by chosen randomly, to see who will sit next to each other and who will serve tea to one another, no one knows before. There will be no class distinction and everybody just accommodates oneself to the circumstances.

3. After setting up the tea ware, we can appreciate other’s tea ware, and get to know one another. This session is called “tea ware appreciation and friendship time”.

4. When it’s “brewing time”, everybody goes back to their seats to make tea. There is no director at a Wu-Wo Tea Ceremony; everything is based on the “public announcement”. The aim of this is to develop participants to follow some conventions.

5. After the first brew, participants take their cups to serve the tea. If, the “public announcement” states to “make four cups of tea, serve the three participants on the adjacent left and keep one teacup for oneself”, please follow the public announcement. At a Wu-Wo Tea Ceremony, tea is served in one direction, with the aim of to let participants serve without waiting for compensation; this is part of the Wu-Wo principles “no reward is expected".

6. If the recipient is sitting when you serve tea to him, please bow to one another without speaking. Participants remain silent at a Wu-Wo Tea Ceremony, when the brewing begins. This will give the cooperation and appearance of group rhythm and harmony.

7. One may begin to enjoy the tea when one has received all. All participants must prepare the tea by themselves; therefore, everyone may have the chance to taste different kinds of tea and appreciates the different teas, this is the “no bias” principle of tea ceremony. When a cup is unpleasant, still accept it, as a reminder to brew good tea, this is the “concentrate and improve” principle of tea ceremony.

10. There is no restriction on the tea ware and the brewing methods. However, to make good tea for everybody is the basic principle. Therefore, Wu-Wo Tea Ceremony is a style of tea ceremony with “no distinction of school or region”.

11. Setting up on the ground is for convenience. There are not any seats that would separate us. But there are no definite restrictions on sitting; one can even bring a small seat.

12. The tea ceremony can be held in the evening. Participants should bring themselves a personal light. An evening tea ceremony is an occasion for people to appreciate the beauty of the evening.
13. After the last cup, we can arrange some music or mediation for about 3 to 5 minutes. This is an opportunity to recollect on the tea ceremony, this session is called the “post tea drinking activity”.

14. “Post tea drinking activity” then, everybody should clean the cups and collect back one’s own cups. After everything is packed, the tea ceremony is over.

15. Wu-Wo Tea Ceremony reminds people of the significance of “emptiness”. Nothingness is not what we are pursuing, but the “having” then “emptiness”. Just like pure light which is formed by all the colors of the rainbow.

Popular posts from this blog 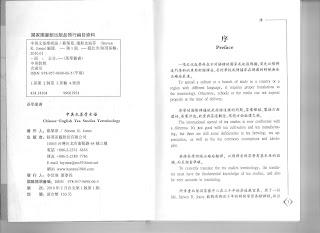 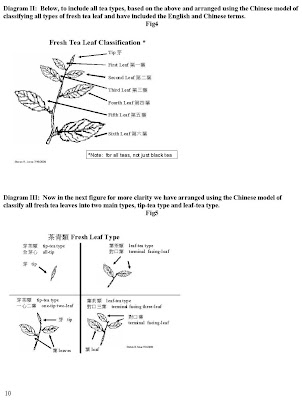